Paul and I woke up in Sioux Falls this morning and were sad to say goodbye to South Dakota. We did make one stop here (you KNOW I couldn’t help myself!) here it is.

The USS South Dakota Memorial is dedicated to a US Navy Battleship that was in commission for less than five years! Because of her World War II exploits against the Japanese in the South Pacific, the USS South Dakota became a legend before she was even a year old. Her wartime accomplishments were reported in newspapers under the name “battleship X” and “Old Nameless”. When the Navy announced that it was going to scrap the battleship, a group formed to save part of it. The memorial has a foot-high concrete outline on the ground, 680 feet long. Along with the anchor, it includes the ship’s bell, a massive propeller, and other pieces. There is an original 16-inch gun and the actual flag mast. Every other year, alumni of the battleship South Dakota gather on its deck (lawn) for a reunion of these heroes and their families. 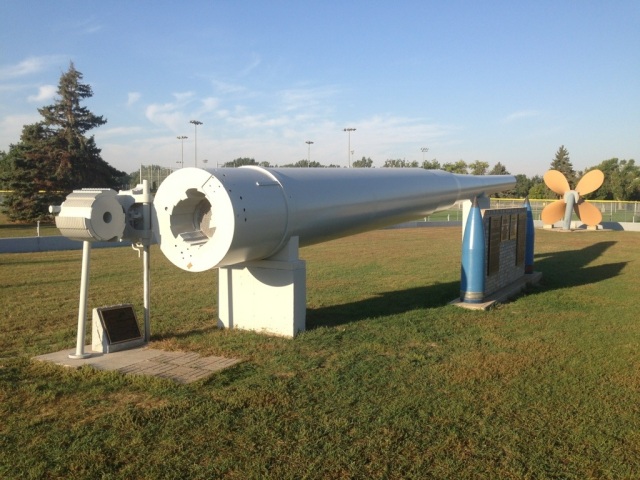 I snitched this next photo from the memorial’s website so you could see how it looks from the air. I hope they don’t mind!

Moving on down the interstate to Iowa! We were intrigued by a place we read about that was in Sioux City.

Trinity Heights was the dream of Father Harold Cooper after he saw a statue of Mary on a trip to California. He tried to buy an old Catholic college on the edge of Sioux City, Iowa. But it was owned by a Savings and Loan who wanted a lot of money for the property. Father Cooper and a small group gathered on the site every day at 4pm to pray for a miracle. Two years later, in 1987, the Savings and Loan crisis occurred and Father Cooper was able to buy the land at 25% of the previous asking price. Who says prayer doesn’t work?

There is a 30ft statue of Mary, a 33ft statue of Jesus, as well as smaller pieces. The life size wood carving of the Last Supper inside the center is phenomenal! The artist gave seven years of his life to create this project. It is a beautiful, quiet place that is “Catholic in theology and ecumenical in intent”. 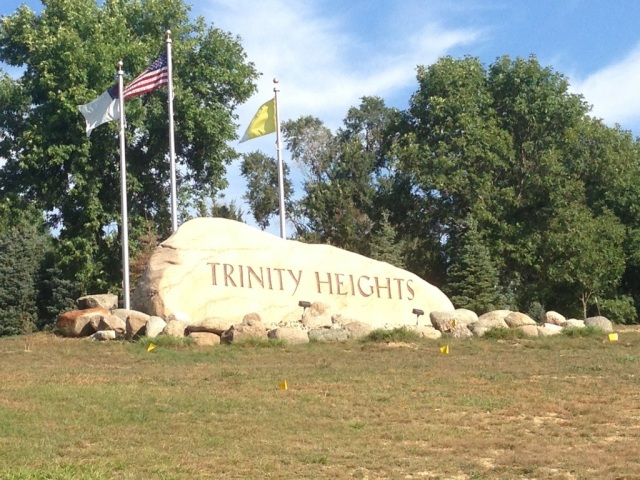 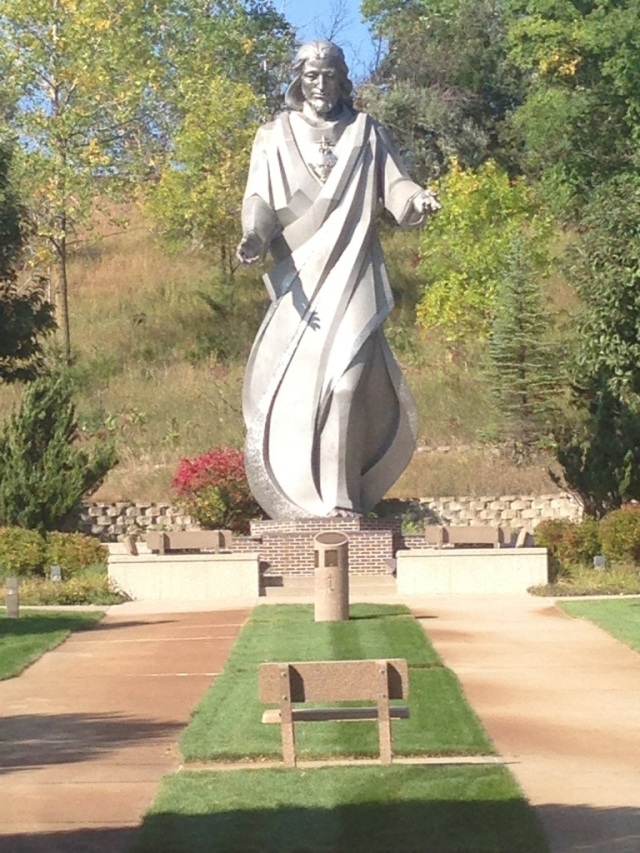 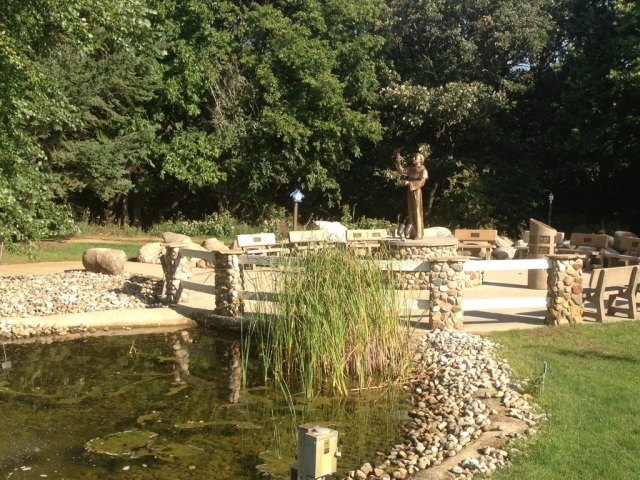 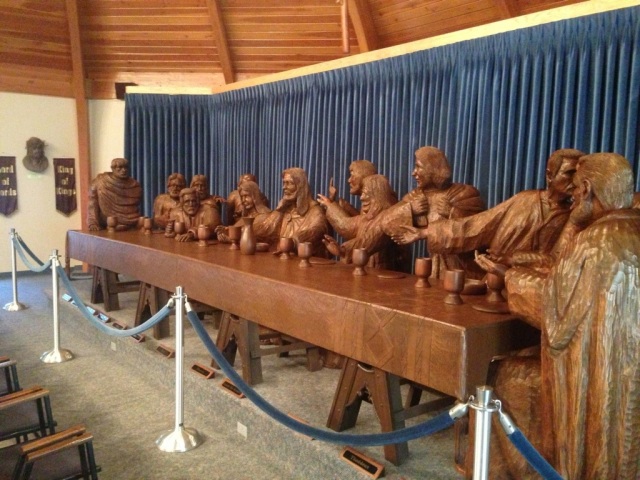 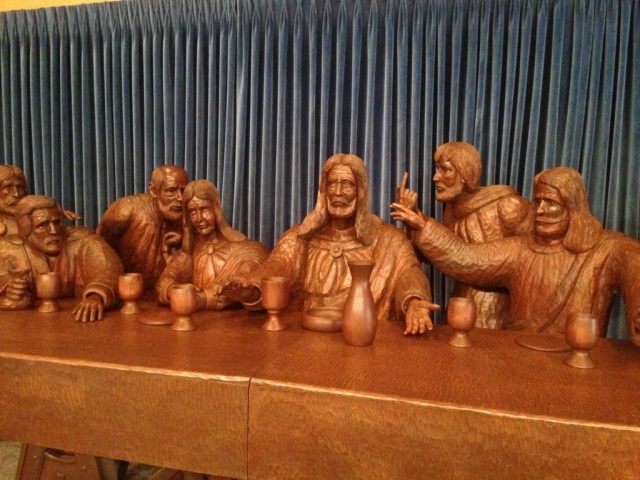 Just a few miles away from Trinity Heights is the Sergeant Charles Floyd Monument. Any of you who are as interested in the Lewis and Clark Expedition as I am, recognize this name as belonging to the Corps of Discovery’s only fatality. Sergeant Floyd died of a probable burst appendix near present-day Sioux City, Iowa on the upstream voyage in 1804. The Captains Lewis and Clark named the hilltop where he is buried “Floyd’s Bluff”. The current monument was completed in 1901 and in June 1960 was recognized as the first National Historic Landmark. 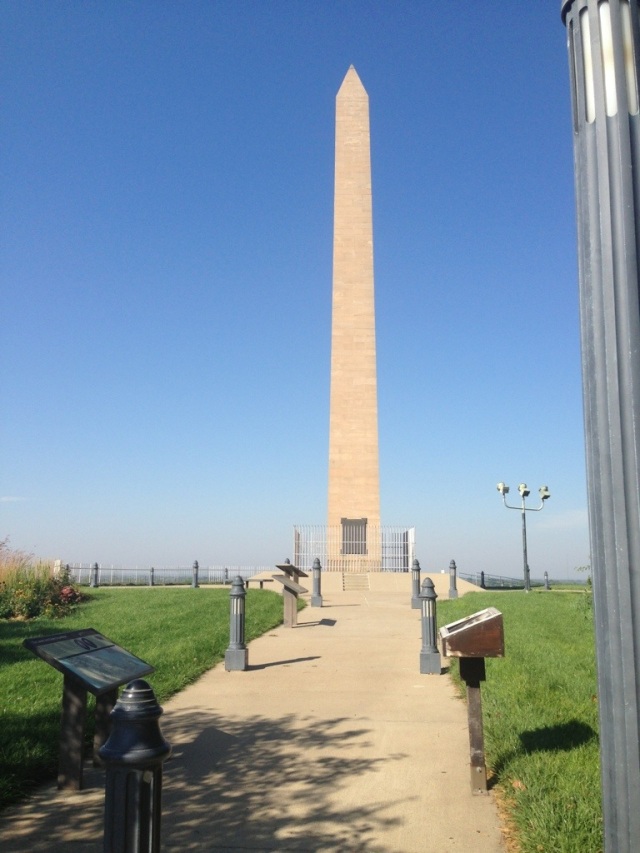 Did you notice there were 15 stars and 15 stripes on this flag? The flag that flies over Sgt. Floyd’s monument is an accurate reproduction of the flag that the expedition operated under in 1804.

If you have looked at a map you can see we are passing through Iowa toward Missouri, but we are SO close to Nebraska so we thought, “Why not?”

Actually we just took a short detour to pay homage to the old Rosenblatt Stadium shrine. Let’s all take a moment…⚾ 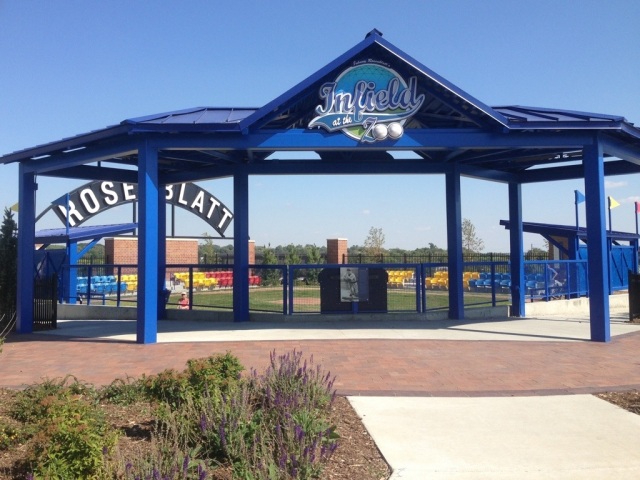 Apparently the good folks from Council Bluffs, Iowa wanted to make sure people were aware when they crossed from Nebraska to Iowa via I-80. Well you can’t miss it now! This is just one piece of “Odyssey”, four giant multi-ton metal piles of cones and cylinders and jagged discs. It cost $3.5 million. I agree with a lot of other people in thinking it looks more like “Freddy Krueger hands”. You be the judge.

Between Kansas City and Joplin, MO we spied this huge mushroom on the side of the interstate.

This, I have learned, is to promote Morel mushrooms which are grown near here. I am endlessly amused at what we find on the side of the road as advertisement. I wonder if people do this in other parts of the world? 😊

Arrival in Joplin, Missouri! We are staying at a Drury Inn for the first time and I must say, I’m pretty impressed. What they called free “snacks” were substantial enough for us to call “supper”, free breakfast, a great price and this…

After twelve days on the road, Daddy deserved a recliner in the room…no extra charge!

Woke up in Billings to a beautiful sunrise.

We stayed at the Boot Hill Inn last night and we highly recommend it. You can tell the owner runs the place. Enough said. 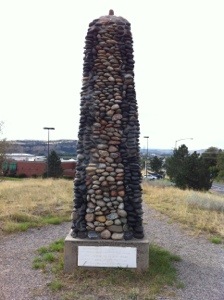 In memory
Of those who blazed the trail and showed to us our west,
In boots and spurs they lie and on this hill find rest.

The most famous resident of this cemetery is “Muggins” Taylor. He took the news of Custer’s Massacre from the battlefield to Bozeman. Later, when he was a Deputy Sheriff, he was gunned down in Coulson’s Laundry (Coulson, WY) as he attempted to stop the laundresses’ drunken husband from beating her. I wonder who put the flowers here. It’s nice to know he’s not forgotten.

We’re off the interstate today on a two-lane highway with a speed limit of 70 mph! It’s a little disconcerting…

We noticed this little church in Broadview, MT. St. Theresa’s. I must say that it does a heart good to see how faith is the center of so many communities that are out in the middle of nowhere. 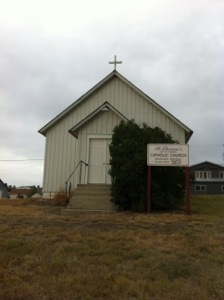 I had Paul stop so we could get postcard stamps. I know what you’re thinking, with cell phones and Facebook and email and blogs why would I bother with postcards? Come on, tell the truth… don’t you still love to get a postcard in the snail mail??

“Oh give me a home, where the buffalo roam…” (you sang along didn’t you?)

We did take a little driving tour of Judith’s Gap, MT. And I mean LITTLE. 🙂 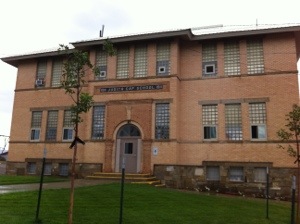 How’s this for roadside fun? 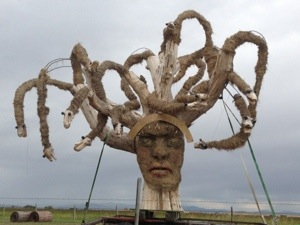 Medusa’s head made from a tree trunk

We are currently traveling on the Lewis and Clark trail. Just a little more than 200 years have gone by and people are still drawn to the West.

The same view that Lewis and Clark had…minus the asphalt

Great Falls, MT! I am so excited about visiting the Lewis and Clark Interpretive Center here in Great Falls. What a fabulous place! Everything you could ever want to know about the Corps of Discovery. (It’s on my bucket list to take a trip starting in St. Louis and follow their trail to the Pacific) If you are ever in Great Falls, you must make a stop here. It truly brings home what Lewis and Clark accomplished!

Here’s a few pics from the museum I thought you might enjoy:

Aren’t we cute in our dress up items? Paul was a sport and did this for me. 🙂

One of the exhibits that shows how they portaged around the falls. 18 miles overland to avoid the five falls in the river. 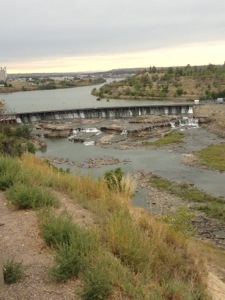 Views up and down the river

We are staying tonight in Great Falls and are so excited about a bucket list item we will check off tomorrow. Stay tuned!